Ethical culture doesn’t exist on its own!

Read the blog by our Chair, Prof. David Grayson CBE.

We have all heard the aphorism “Culture eats strategy for breakfast” and is increasingly recognised as a key determinant of long-term organisational success.

So, I have a question for any non-executive director, CEO, Senior Management Team member:

In the organisation for which you are responsible, which of Figures 1, 2 or 3 best represents the current reality?

Clearly, if you answer “Figure 1,” you need serious help – and fast!

Ideally, you will be able to respond “Figure 3” where there is broad alignment and leadership is constantly striving for better.

Practically, most honest responses would probably be some version of Figure 2.

Obviously, as chair of the Institute of Business Ethics, I am personally interested in how organisations build and maintain a strong ethical culture, where everyone knows what is expected of them, in terms of behaving ethically and responsibly at all times and all circumstances – and they have an ethical decision-making framework - especially for those tough grey areas, where it is not immediately obvious, what is the right thing to do.

I don’t think, however, that an ethical culture is something that stands alone. It has to be within a sustainable culture. Sustainable also in the sense of continuing into the indefinite future.

Certainly, a sustainable culture is ethical: there is a clarity about the principles guiding how all employees are expected to behave. This means having an Ethics Code or Statement of Business Principles. Making sure that the Code is regularly reviewed and updated – preferably after external benchmarking as well as internal consultations.

Employees are inducted in these principles (Code of Ethics or Business Principles). This is backed up by regular training and CPD, by regular communications, including leaders (at different levels of the organisation) talking about the practical applications of the Code and telling stories about how the Code is being used in the organisation.

There is also a reward & recognition system that reinforces rather than subtly undermines, the principles of ethical behaviour. (In Figure 1 and 2 organisations, employees can often see that otherwise “high-performers” are allowed to flout the Ethics Code or the Code of Business Principles).

A sustainable culture is also one where employees are genuinely empowered and engaged; and are encouraged to / want to take the initiative. This requires a subtle blend of “top-down” – leadership which sets out the strategy and direction of the organisation; and bottom-up where individuals at all levels are confident to speak-up, challenging unethical and irresponsible behaviour and championing innovation. This is critical because no organisation – however successful it may currently seem – can afford to grow complacent and cruise. Black Swans and disruptive innovators can spread disruption – “creative” or otherwise – and fast. Sustainably successful organisations need a culture where internal and external partners want to propose and champion innovations for them. So sustainable cultures are not rigid. On the contrary, they are flexible, agile and continuously improving.

This also assumes a culture of transparency and accountability. And an ethical and sustainable culture also has to be genuinely inclusive. People have to feel they have a genuine stake in the long-term success of the business. The author and business leader Margaret Heffernan told an IBE webinar recently that companies that depend on a “Gig Economy” workforce, may soon start being downgraded because they are not resilient. By the same logic, will we see businesses that give employees a share in profits / ownership be marked up as more resilient, long-term bets? I hope so! 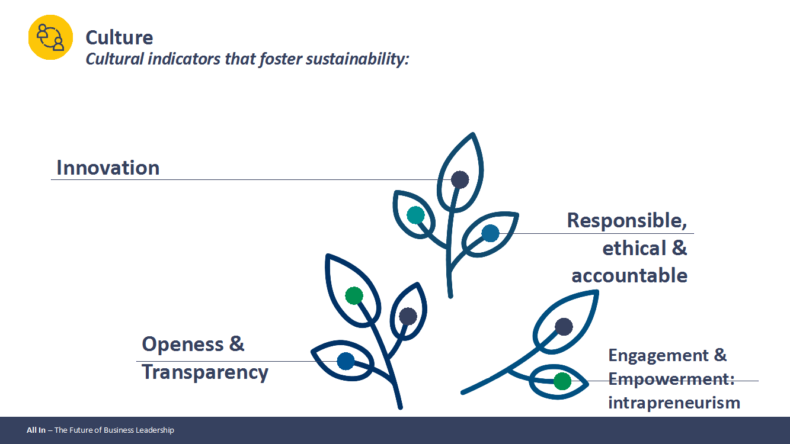 Image from the book All In - The Future of Business Leadership by David Grayson, Chris Coulter and Mark Lee.

The IBE will continue to focus our own work on helping boards and Senior Management Teams to build and maintain an ethical culture: constantly identifying and refining the building-blocks for this and how to check for alignment. We do so though, clear in the knowledge that a successful ethical culture is a sustainable culture.

The Guardian has named David as one of ten top global tweeters on sustainable leadership alongside Al Gore, Tim Cook - CEO of Apple, and Facebook's COO Sheryl Sandberg

The IBE has published a discussion paper, Organising for Ethics, which poses a series of questions and challenges for people involved in ethics functions at all levels, including the board.

There is no single blueprint for exactly what a good ethics function looks like, but there are certain elements that are key, we outline some of these in our latest publication.