Business Ethics in the News 2021

This resource presents an overview of the ethical concerns and lapses, as well as the positive business ethics stories, that the IBE recorded for its media monitoring exercise in 2021. It provides an analysis of the year’s trends and the issues and sectors that featured most frequently.

The IBE monitors the media throughout each year to record positive and negative stories that focus on business ethics issues. While this briefing does not comment on the severity of ethical lapses or concerns, it does show which sectors and issues were most cited. This analysis gives a good indication of the challenges faced by businesses and the actions, constructive or otherwise, that some are taking to overcome those challenges.

The rise of technology to assert itself as the most ethically problematic sector in the last two years, surpassing banking and finance, reflects its growing ubiquity in our lives and the challenges around issues such as data privacy that are seemingly inherent to the industry. Meanwhile, the growth in the number of stories concerned with the treatment of employees seems to reflect, significantly, the necessary increase in actions taken by companies to alter long-established working patterns in response to the pandemic.

Click through the tabs below to find more details and analysis on the ethical lapses we recorded, sorted by sector and by issue, and on the positive business ethics stories that featured in the media this year. 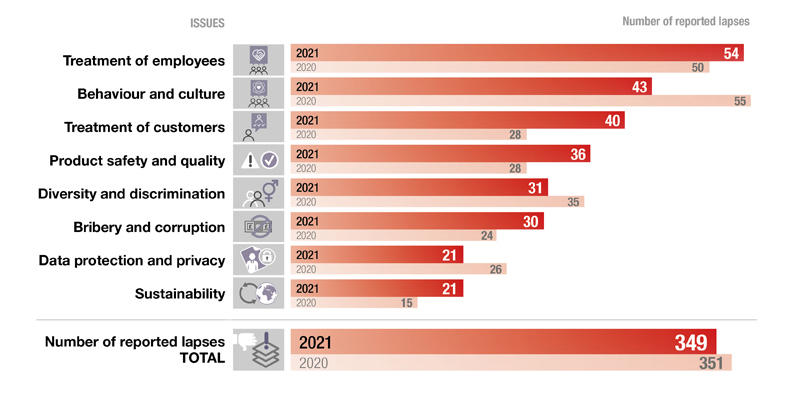 The impact of COVID-19

We noticed a continuing growth in the number of stories that focus on ethical challenges posed by the pandemic and, most interestingly, on as yet unresolved ethical dilemmas. For example, we felt unable to classify stories about companies enforcing mask-wearing for customers, or mandating vaccinations for employees, as positive or negative. All of these stories involve tradeoffs in ethical values and consequences, such that a case could be made on either side.

Researchers at the IBE monitored various major news outlets over the course of the year to record all stories that featured business ethics issues in both a positive and negative light. These stories were categorised according to the sector within which the company concerned operates and the specific issue that the story is about. We then analysed these data to determine which are the year’s most prevalent sectors and issues and compared them with last year’s data to gauge interesting and important trends. We only count each story once, regardless of how many times it features in the same media outlet or across  various outlets.

Is your business ethical - and do your stakeholders think so?

Listen in as Survey Director, Christopher Cowton shares his thoughts on our latest survey, IBE Attitudes of the British Public to Business Ethics 2022.

Attitudes of the British Public to Business Ethics 2022

The Power of Trust