In our Ethics at Work: 2021 international survey of employees, we surveyed almost 10,000 employees in 13 countries to find out more about their attitudes to and perceptions of ethics in their organisations. We undertake this survey every three years.

Significantly more employees believe that ethical standards in their organisation have improved (37%) rather than worsened (8%) following the pandemic.

Organisations also seem to be more likely to have the key building blocks of a comprehensive ethics programme than in the past. For example, over half of employees (53%) say they are aware of their organisation having a Speak Up mechanism to report misconduct confidentially in comparison with 46% in 2018. This percentage has increased in all the countries for which historical data is available, except for Italy (-3%) and the UK (-2%). The biggest improvements have been recorded in Switzerland (+20%) and Spain (+16%).

Ethics programmes have a big impact

Importantly, they are also more likely to have raised their concerns about misconduct that they have been aware of (72% vs 36%) and be satisfied with the outcome after doing so (80% vs 26%). This suggests that employees in these organisations feel safer about speaking up and that organisations with an ethics programme are more likely to address concerns effectively.

The research findings suggest that introducing a comprehensive ethics programme can increase employees’ awareness of ethical issues and their ethical sensitivity. However, the results are not entirely positive. Employees in organisations with a comprehensive ethics programme are significantly more likely than those in organisations without an ethics programme to say that their line manager rewards employees who get good results, even if they use practices that are ethically questionable (48% vs 18%). They are also more likely to say that they have felt pressured to compromise their organisation’s standards of ethical conduct (11% vs 9%).

This suggests that having the formal elements of an ethics programme is not, in itself, enough to guarantee that employees will change their behaviour and act more ethically. It is important for organisations with an ethics programme not to rest on their laurels, but to continue to identify and focus on areas that still need improvement.

Another area of concern is that there seems to be a disconnect between managers’ and non-managers’ perceptions of ethics at work. Managers are more likely than non-managers to have positive views about the organisational culture, their own management and the ability of their organisation to act responsibly with external stakeholders. This is a key issue for organisations to explore and address.

Fear and futility are still barriers to speaking up

Despite employees in 2021 being more likely to be aware of their organisation’s Speak Up mechanisms, only slightly more than half of employees who were aware of misconduct say that they spoke up (57%).

In six of the ten countries for which historical data is available, employees are less likely than in 2018 to have spoken up about the misconduct that they have been aware of. Willingness to speak up has decreased the most in Switzerland (-17%) and in the UK (-12%), while it has increased the most in Italy (+4%).

The most common reasons why people don’t speak up are that they are concerned that they might jeopardise their job (34%) and that they do not believe that their organisation would take corrective action (34%). It is particularly shocking that 43% of employees who spoke up about misconduct say that they experienced retaliation as a result.

The full survey report with detailed findings and additional commentary can be downloaded below... 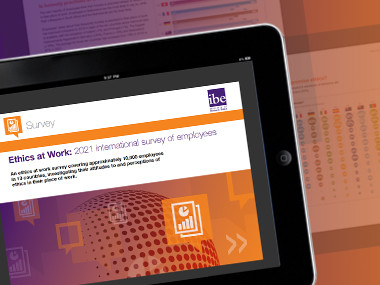 Download the PDF report which presents the detailed survey findings.