How can an organisation support large numbers of employees in multiple locations in doing the right thing when faced with an ethical dilemma?

IBE research indicates that organisations with a more mature ethics programme and more engaged senior leadership are more likely to have developed an ethics ambassador network.

The role and diffusion of ethics ambassadors

Ethics ambassadors can be defined as employees that assist senior management in promoting an ethical culture based on shared core values within the organisation. Although they liaise with full-time ethics practitioners, they are not part of the ethics function - they are employees who work at different levels within a company and often take up this role in addition to their day-to-day job. Their backgrounds can be diverse but their responsibilities as ethics ambassadors tend to be similar to facilitate conversations on ethics and identify ways in which various parts of the business can work together to solve ethical issues when they arise.3

The focus of an ethics ambassador will be influenced by a number of internal and external factors, such as the sector in which the organisation operates or whether it has experienced major ethical lapses in the recent past.

Care needs to be taken to ensure that the responsibility allocated to an ethics ambassador is commensurate with his/her skills, experience and motivation. This may include:

Reflecting that ethics programmes have become more sophisticated, the IBE Survey (2016) Corporate Ethics Policies and Programmes introduced the question of whether a network of ethics ambassadors is in place.5 This allowed us to identify two subgroups of respondents: companies that have a network of ethics ambassadors in place and those that do not.

Ethics ambassadors are normally located across business units, geographical locations and the hierarchy of a company. It emerged from the survey that companies use a variety of job titles for this function:

Such roles are becoming increasingly common in business - more than half of respondents (56%) say that their company appointed a network of employees to this role. The responses from such companies provide interesting data on the impact a network of ethics ambassadors can have, and the link between their presence and senior leadership engagement.

They can act as points of contact between the organisation and local employees, and as a source of advice for their colleagues who might not feel comfortable with raising their concerns or asking questions through the official speak up line. Whilst they do not need to be ethics experts, ethics ambassadors should have substantial knowledge of the company's ethics programme and be able to point staff in the right direction for further guidance if necessary.

Ethics ambassadors can also play a role in adapting the way ethics messages are communicated in the local context and language. This may involve translating codes of ethics and other relevant policies, writing or translating training and guidance manuals, and adapting the ethics programme to meet the needs of the local operating environment. This encourages buy-in from employees in that it decreases the likelihood of misconceptions which arise from inadequate translations or a clumsy choice of wording.

Ethics ambassadors: an important element of the ethics programme

IBE research demonstrates that an effective ethics programme is paramount to support an ethical culture based on the company's core values.7 Ethics ambassadors can help to broaden the scope of a company's programme, reaching out to employees from within the organisation and promoting core values at a local level. Figure 1 shows that companies which have established a network of ethics ambassadors tend to put in place a more comprehensive ethics programme than those that have not.

Figure 1: Main elements of the ethics programme in companies with and without ethics ambassadors

In both groups, the code of ethics has become an essential element of a company's ethics programme and the totality of respondents report that their organisation provides this sort of guidance to their staff. However, companies with a network of ethics ambassadors appear to adopt a more advanced approach to embedding an ethical culture.

In particular, companies with ethics ambassadors seem to place more importance on reporting on their ethical performance - especially internally. Ethics training is also more common in this group. Such results support the idea that ethics ambassadors have an important role to play in raising awareness and enhancing employee knowledge, acceptance and implementation of the ethics programme.8 Similarly, it is important to note that for ethics ambassadors to fulfil their role effectively, they need to be supported by a number of tools and mechanisms.

Priorities of the ethics programme

The main priorities of the ethics programme are similar in both groups, as Figure 2 highlights. However, companies with ethics ambassadors seem to place a stronger focus on embedding ethical values to strengthen their ethical culture in general, rather than on specific issues such as anti-bribery and corruption or conflicts of interest. Moreover, two respondents explicitly say that improving their ethics ambassadors' network is a priority for their company's ethics programme.

The more prominent focus on the promotion of values and culture is reinforced by what respondents report as the main intended purpose of the code of ethics, as shown in Figure 3. Creating a shared and consistent corporate culture is mentioned more frequently by companies with ethics ambassadors, whilst the external elements of guarding reputation and making a public commitment to ethics are far less prominent.

Figure 3: Main purpose of the code of ethics

The survey confirms that ethics ambassadors fulfil an important role in raising awareness among employees, in their division or stage of each of the main building blocks of an ethics programme.9 Respondents to the survey recognise the importance of training employees on ethics matters and a number of them in both subgroups mention training as one of the activities that take up most of their time.

However, companies with ethics ambassadors report that significant resources are invested in activities that involve the direct engagement of employees, particularly at the global level and across different locations. One respondent said that among the main activities he carries out as part of his job, there is "travelling across EMEA to educate employees and increase awareness of the programme even at remote sites", while another mentions "managing the ethics ambassadors programme in Asia, Pacific and Europe".

In particular, the latter group seems to have a more comprehensive strategy to communicate the existence of their code of ethics to employees, as Figure 4 shows.

Figure 4: How companies communicate their code of ethics to employees 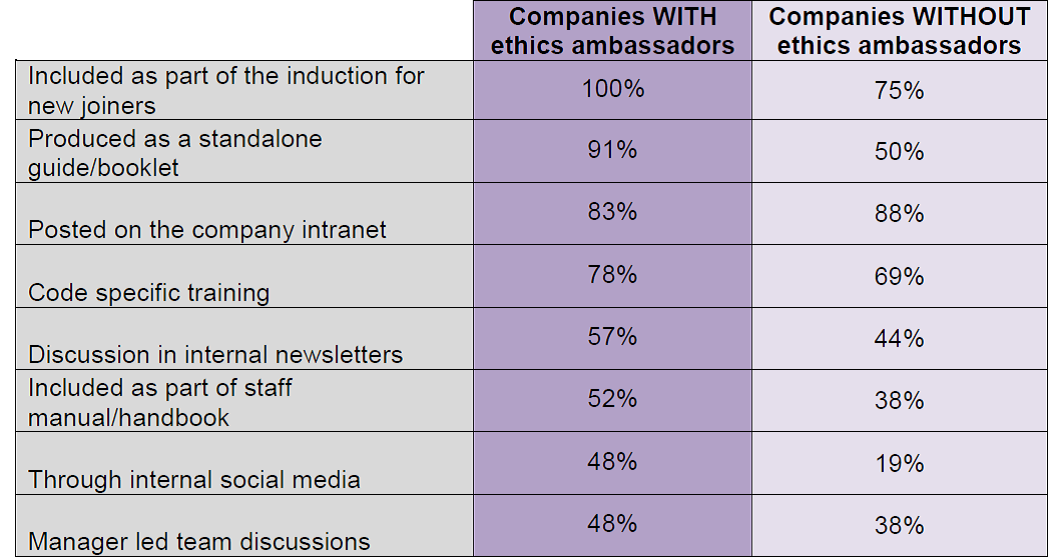 Setting the tone from the top

A consistent tone from the top and senior leadership engagement, especially in the boardroom, is crucial to ensuring that core values are embedded within business practice. The IBE Survey shows that boards of directors seem to be increasingly aware of their role in promoting and taking responsibility for the ethical culture in their organisation. Respondents from the FTSE 350 group, where it was possible to track changes over time, highlight how ethics, values and culture are discussed at board level more frequently than in the past.

A similar focus on these topics at board level can be observed in both subgroups analysed, although companies with a network of ethics ambassadors tend to discuss such matters on the boardroom more often.

These figures can be read in parallel with other indicators of the commitment to an ethical culture by senior leaders. An important result that emerges from the survey is that the board and the executive team are required to undertake mandatory ethics training more frequently than in other companies, as Figure 5 illustrates.

Although the general picture in our sample is positive overall, the slightly higher engagement at board level registered among companies with ethics ambassadors seems to have an impact on corporate culture: 96% of respondents from such companies report a supportive environment for ethics, compared to 88% in the group without.

Similar results emerge regarding engagement at the top: Senior leaders are described as very engaged in 70% of cases in companies with ethics ambassadors, while only 60% of respondents are equally engaged in the group without. There doesn't appear to be as significant an impact on the engagement of the general workforce, which is seen as 'very engaged' in 40% of cases in both subgroups. This might signify that, whilst in some organisations there is a strong driver from the top to promote the ethics message, it might take time to produce a change in practice in all locations and at all levels.

1 IBE Good Practice Guide (2010) Ethics Ambassadors. This publication draws on the experience of companies which use ethics ambassadors and provides an understanding of how companies recruit their ambassadors, an overview of their role and how they can be trained and supported effectively to promote an ethical culture.

2 IBE Survey (2017) Corporate Ethics Policies and Programmes: 2016 UK and Continental Europe Survey. Since 1995, the IBE has conducted a survey of large companies to understand the state and development of their ethics programme and policies. In 2016, as in 2010 and 2013, it surveyed companies quoted in the FTSE 350 and larger companies quoted in France, Germany, Italy and Spain. This year, the scope of the Survey was broadened by including other large companies with a significant presence in Europe.

5 Ibid fn 3. The results illustrated in this factsheet are based on the analysis of a sample of 41 companies that responded to the question: ‘Does your approach to managing ethics include a network of ethics ambassadors (or equivalent)?’. Of these 41, 23 said yes and 18 answered no. Due to the size of the sample, results were not formally tested for statistical significance. However, the response rate is sufficient to draw general conclusions and evaluate trends.

6 Borealis’ Commitment to Ethics (as available in February 2017).

The Employees' Voice: ethics at work 2021

Every crisis is an opportunity