Why the ethical behaviour of politicians matters to business

IBE Chair, Prof. David Grayson CBE addresses why the ethical behaviour of politicians matters to business, and indeed to rest of us too!

The IBE is focused on business ethics. We have to be very careful about straying into the ethical behaviour of other parts of society – however strong our personal views may be. As a former would-be politician (albeit from a different millennium), I am particularly very cautious about commenting on the ethics of politicians.

Nevertheless, I believe it is reasonable that if the public perceives the behaviour of our politicians to be unethical – over time – this can be highly corrosive of faith in the ethical behaviour of other parts of society, such as businesses, as well.

The latest IBE Attitudes of the British Public to Business Ethics 2022 survey shows a further significant fall in the public’s views as to the ethical behaviour of our politicians. 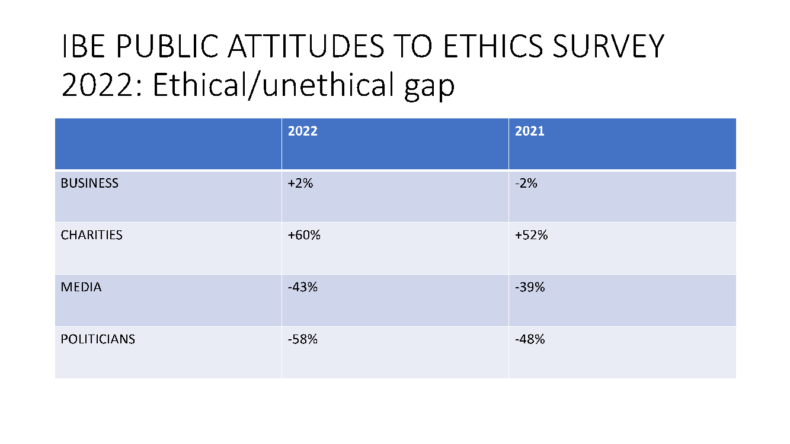 Reasons for why the British public has this negative 58% Ethical: Unethical Gaps for politicians are not hard to find. Indeed, Lord Evans of Weardale, chairman of the Committee on Standards in Public Life, gave chapter and verse in his important 2020 IBE Hugh Kay Memorial Lecture. If you haven’t read it or watched the lecture, I strongly recommend doing so. It is a sober and very thoughtful analysis. This, of course, was long before Partygate, sexual harassment allegations or attempts to change parliamentary rules relating to suspensions of MPs from parliament.

Now, it is important to remember, that the Public Attitudes survey is a snapshot in time. Also, it is about perceptions. Still, a belief that politicians behave unethically, undermines trust in them – and potentially in the democratic system itself. This is especially corrosive when so many people say they are politically homeless: i.e. they do not believe they are in alignment with any political party.

I was privileged to moderate a fascinating conversation with Professor Sandra Sucher from the Harvard Business School for the IBE last month, about her latest book: The Power of Trust: How Companies Build It, Lose It, Regain It.

Sandra Sucher identifies four key components of trust: Competence, Motives, Means and Impact. I believe we can apply her analysis to trust in politicians too. If the public perceives politicians as behaving unethically, it will undermine each of these four dimensions and especially voters’ views about the Motives of politicians and the Means – the ways that voters believe that politicians operate.

This must be incredibly frustrating and dispiriting to the majority of politicians in all parties who do behave ethically and responsibly. Unfairly, they are tarnished with the same brush as the politicians who do let the side down so badly. And this, in turn, threatens faith in other institutions in society too. The danger is that people stop believing what leaders of institutions say and do.

The latest IBE survey data provides yet more ammunition for the decision by the independent Committee on Standards in Public Life to launch “Leading in Practice, a review examining the role of leadership in embedding the Principles of Public Life in public sector organisations.”

MPs are already expected to adhere to the House of Commons Code of Conduct and Guide to Rules. The Code includes explicit reference to the Nolan Principles – the seven principles of public life.

The current situation is a powerful reminder of what the IBE has learnt over the years about business behaviour and Codes of Business Ethics. Codes on their own are not sufficient. They have to be brought to life, socialised and internalised so that they become part of the unconscious competence of everyone involved. Our IBE experience is that this requires tone from the top: clear leadership which is demonstrably championing the Code of Ethics and setting the example for others. It also requires regular training and communication of the expected ethical values and behaviours. It needs a Speak-Up culture with people willing to challenge behaviour which they think is unethical – and mechanisms to ensure that complaints can be investigated without fear or favour. And that there are robust mechanisms for dealing with breaches of the Code.

Certainly, “something must be done!” It is dangerous for British politicians and democracy and for trust in other parts of society too, for the politicians’ Ethical: Unethical Gap to persist in such negative territory.

The IBE would like to have your views on how the practical experience of businesses in trying to embed ethical behaviour, might be applied to help British politicians. Ultimately, of course, it is up to the electorate, since they are the people that MPs are accountable to. This is a test for society about how much we really value ethical standards.

The Guardian has named David as one of ten top global tweeters on sustainable leadership alongside Al Gore, Tim Cook - CEO of Apple, and Facebook's COO Sheryl Sandberg

Organisational Culture: to manage what you can’t measure, measure what helps you manage

Read our latest guest blog by Alison Cottrell, Chief Executive of the Financial Services Culture Board.

Innovating Business Ethics: Lessons from refreshing a Code of Conduct