Margaret Heffernan’s recently published book Uncharted : How to Map the Future Together could not be more timely. It argues that much in life is – and always has been – unpredictable and that the sense of control that technology sometimes confers is illusory. If forecasting can see accurately no more than a year out, if history doesn’t repeat itself, if psychological profiling is inadequate and harmful, how can we anticipate the future we will all face? If we can’t rely on these models to predict what is to come, how should we work and live?

These are strange and uncertain times. The pandemic of Covid 19 has plunged the world into ‘lockdown’ with wide-reaching social and economic consequences. Yet out of it we have seen both an extraordinary community spirit (Captain Tom Moore raising over £30 million from his daily walk) to vile attacks on NHS staff. We may all be in the same pandemic – but our experiences of it are wildly different. Uncertainty is here to stay, and with it comes a challenge to our humanity and creativity. Can we rise to it – and what do we need to do so? If we could relinquish the hold that planning has over our minds, we could do much that prepares us for the unknown.

Listen in as Margaret discusses the themes of her latest book. Margaret is an entrepreneur, Chief Executive, and world renowned author of Wilful Blindness: Why We Ignore the Obvious at our Peril and A Bigger Prize.

If you have questions you’d like us to ask Margaret, please email them to events@ibe.org.uk. 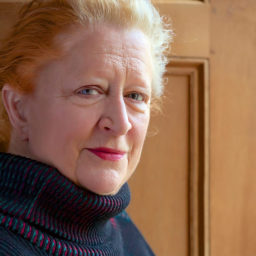 Dr. Margaret Heffernan produced programmes for the BBC for 13 years. She then moved to the US where she spearheaded multimedia productions for Intuit, The Learning Company and Standard&Poors. She was Chief Executive of InfoMation Corporation, ZineZone Corporation and then iCast Corporation, was named one of the “Top 25” by Streaming Media magazine and one of the “Top 100 Media Executives” by The Hollywood Reporter.

The author of six books, Margaret’s third book, Willful Blindness : Why We Ignore the Obvious at our Peril was named one of the most important business books of the decade by the Financial Times. In 2015, she was awarded the Transmission Prize for A Bigger Prize: Why Competition isn’t Everything and How We Do Better, described as “meticulously researched…engagingly written…universally relevant and hard to fault.” Her TED talks have been seen by over twelve million people and in 2015 TED published Beyond Measure: The Big Impact of Small Changes. Her most recent book, Uncharted: How to map the future was published in 2020 and quickly became a bestseller. She is a Professor of Practice at the University of Bath, Lead Faculty for the Forward Institute’s Responsible Leadership Programme and, through Merryck & Co., mentors CEOs and senior executives of major global organizations. She holds an honorary doctorate from the University of Bath and continues to write for the Financial Times and the Huffington Post.

Heffernan is ... a deft storyteller ... Bad "smart thinking" books offer 2x2 matrices and jargon; good ones offer theory and evidence. Heffernan steps outside the caregory entirely. She wants us to engage with the particularities of people, places and the problems they faced – to empathise with them, reflect on our own lives and our own careers, and to draw our own conclusions. Uncharted is ... wise and appealingly human.

An urgent read … Karl Popper for the 21st century.

I have never read anything quite like Uncharted. I was captured on page 1 and captivated to the very end.  My whole idea of what the future might hold, the impotence of most forecasting, sagas of amazing acts of preparedness. She shook core beliefs and made me look at the world—and myself—differently. It doesn't get any better than that.

Tom Peters, author of In Search of Excellence

Register for a free online profile

To register for this event you will need to create an online profile, to do so please complete the registration form.

Once you have completed this registration form you will progress through to a first time login section where you will be asked to select your mailing preferences. This will enable you to receive IBE newsletters, purchase publications, book training, as well as register for this webinar.

Lastly please don’t forget to set up your password; you can do this via the email received after registration, or via the update password section of the online portal. Passwords must contain 8 characters consisting of 1 uppercase, 1 number and 1 symbol.

Already have an online profile?

Once you have registered you will receive a link to join the meeting via GoToWebinar - this link is unique to you and shouldn't be shared further as this may stop you being able to participate when the time comes.

Webinar Recording
Please note that this webinar will be recorded and available to view after the event via our website.
Return to listing